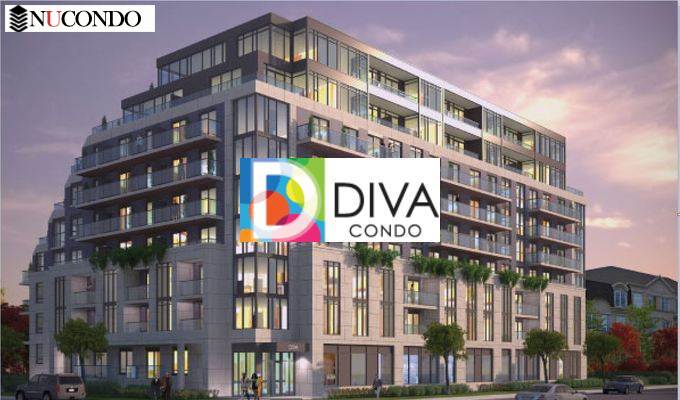 Diva Condos has flexible floor plans and many size options.
With variety of amenities, it is made up of 1 Bedroom, 2 Bedroom units.

The unit size is ranging from 760 to 805 square feet with prices starting from low 400k.
This is a 9 stories Condo building.

Music has its “divas” and now North York has a great one of its own. DIVA Condo has arrived on the scene and never before has the North York skyline looked so sleek and stylish. The 9-storey tower of precast concrete, brick, steel and glass is modern in its architecture and cuts a striking figure against the sky. Inside, a stunning living environment awaits, luxuriously appointed in every detail, and designed to pamper its residents with the kind of posh lifestyle that every diva demands.

York Centre ( ~0.99 KM )
York Centre (French: York-Centre) is a federal electoral district in Ontario, Canada, that has been represented in the Canadian House of Commons from 1904 to 1917 and since 1953.
The riding was previously considered one of the safest Liberal Party seats in Canada; however, this changed as the Conservative Party has gained ground the last few elections, and its candidate Mark Adler won the seat in 2011.

Board of Jewish Education (Toronto) ( ~1.04 KM )
The Board of Jewish Education (BJE) of Toronto, Ontario is the education department of UJA Federation of Greater Toronto, and is an administrative body that offers direction to the Greater Toronto Area’s Jewish schools. In 2007 The BJE was replaced by Mercaz, The Centre for Enhancement of Jewish Education.
Albert and Temmy Latner Jewish Public Library (Toronto) ( ~1.04 KM )
The Albert and Temmy Latner Jewish Public Library in Toronto, Ontario, Canada was founded in 1941 as the Jewish Public Library by bookseller Ben Zion Hyman. The library began as a small independent collection located at Hyman’s storefront on Spadina Avenue in the late 1930s until 1941 when the public library was formally established and moved to a set of rooms in the College Street and Spadina Avenue area in the 1940s.
Bathurst Jewish Community Centre ( ~1.08 KM )
The Bathurst Jewish Community Centre (BJCC) was the Jewish Community Centre for the Toronto area. It was located along Bathurst Street in the Bathurst Manor neighbourhood of Toronto and had over 100 programs and services, serving daycare to stroke recovery, seniors, Maccabi athletes, and campers.
William Lyon Mackenzie Collegiate Institute ( ~1.24 KM )
William Lyon Mackenzie Collegiate Institute is a semestered secondary school located in Toronto, Ontario. It was built in 1960 to accommodate the skyrocketing number of new students in what was then known as North York, and to ease overcrowding at Northview Heights Secondary School.
Tanenbaum Community Hebrew Academy of Toronto ( ~1.27 KM )
Established in 1960, The Anne & Max Tanenbaum Community Hebrew Academy of Toronto (Hebrew: האקדמיה העברית ע”ש טננבאום), or “TanenbaumCHAT”, is a private Jewish high school which is located on two campuses in Toronto, Canada.

Toronto Aerodrome ( ~1.29 KM )
Toronto Aerodrome, also known as Canadian Air Express Airport was an aerodrome located in Toronto, Ontario, Canada. One of the historical airfields of Canada, operated from 1928 to 1939, it was situated at the current Downsview subway station on Dufferin Street and Sheppard Avenue West.

Bathurst Manor ( ~1.32 KM )
Bathurst Manor is a neighbourhood located in the North York district of Toronto, Ontario, Canada. It sits on a plateau bounded on the north by Finch Avenue West, on the west by Dufferin Street, on the east by the Don River (west branch), and on the south by Sheppard Avenue West.