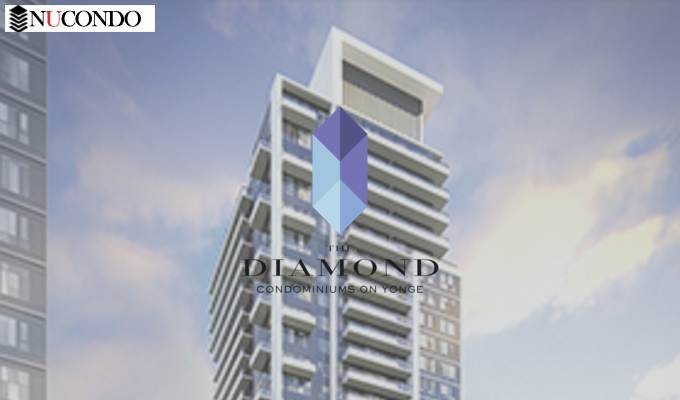 Diamond Condominiums on Yonge Condos has flexible floor plans and many size options.
With variety of amenities, it is made up of 1 Bedroom, 1 Bedroom + Den, 2 Bedroom, 3 Bedroom & Up units.

The unit size is ranging from 439 to 839 square feet with prices starting from upper 200k.
This is a 30 stories Condo building.

AN IDEAL SETTING.
THE PERFECT DIAMOND.

Whether by day or by night, in a uniquely serene setting with ample and luxurious setbacks to create open view lines, with a large private garden, and Yonge Street a few short steps away, you have the premier combination of urban living and a park like setting.

The Diamond benefits from being located on Yonge Street and the ease of access to every amenity you would want. You have the most cosmopolitan selection of foods at your doorstep, from organic grocers, to traditional and specialty stores and the best restaurants a few steps away. While also having a unique feature of being set back from Yonge Street so that you have a true oasis of convenience and comfort, quiet and exclusive residential living.

Dempsey Store ( ~0.42 KM )
Dempsey Store was a hardware store built in 1860 at the northwest corner of Yonge Street and Sheppard Avenue, in North York, Toronto, Ontario, Canada. The historic store was moved and restored as a historic site further north at 250 Beecroft Avenue in 1996.

Gibson House ( ~0.45 KM )
Gibson House is a historical museum in Toronto, Ontario, Canada. It is located on Yonge Street, in the North York Centre neighbourhood of the former city of North York.

North York City Centre ( ~0.54 KM )
North York City Centre, sometimes known as Downtown North York, is a central business district in Toronto, Ontario, Canada in the district of North York. Located within the official neighbourhood of Willowdale along Yonge Street, between Sheppard and Finch Avenues, the city centre was developed following the opening of the eponymous rapid transit station by the former city of North York, where many corporate headquarters were located.

Empress Walk ( ~0.6 KM )
Empress Walk is a large condominum and retail complex at the intersection of Yonge Street and Empress Avenue in the North York Centre area of the former city of North York in Toronto, Ontario, Canada. Developed by Menkes Development, Phase 1 was completed in 1997 and Phase 2 by 2000.

North York Centre (TTC) ( ~0.62 KM )
North York Centre is a metro station on Line 1 Yonge-University of the Toronto rapid transit system. The station is located under Yonge Street, where it is intersected by Park Home Avenue and Empress Avenue.

North York ( ~0.68 KM )
North York is a suburban district in Toronto, Ontario, Canada. It is located directly north of Old Toronto, between Etobicoke to the west and Scarborough to the east.

Finch (TTC) ( ~0.77 KM )
Finch is the northern terminus subway station of the Yonge Street section of Line 1 Yonge–University in Toronto, Ontario, Canada. It is located under Yonge Street north of Finch Avenue.