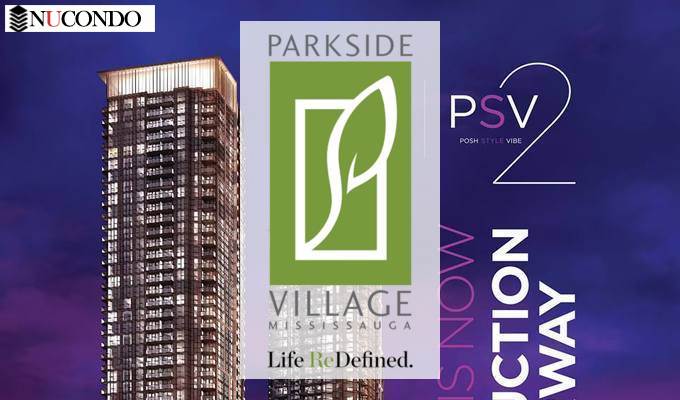 Block Nine – Parkside Village – South Tower Condos has flexible floor plans and many size options.
With variety of amenities, it is made up of 1 Bedroom, 1 Bedroom + Den, 2 Bedroom, 2 Bedroom + Den, Penthouse, 3 Bedroom & Up units.

The unit size is ranging from 546 to 1464 square feet with prices starting from upper 200k.
This is a 25 stories Condo building.

Parkside Village offers a truly unique urban experience in Mississauga. You can leave the car at home and stroll to your favourite Café or restaurant. At your doorstep is the Living Arts Centre, an array of shops and over 3 acres of parkland all a part of the Parkside Village.
…
Imagine life at the centre of it all at Block Nine. In the heart of Mississauga’s thriving city centre, Block Nine offers a vibrant streetscape of shops, cafés and services just beyond your front doors. Secure your spot and register to receive exclusive access to advanced pricing, floor plans, and the latest incentives.

One Park Tower (Mississauga) ( ~0.27 KM )
One Park Tower is a skyscraper located in the city of Mississauga, Ontario, Canada. It was completed in 2008, stands at 142 meters, and has 38 floors, making it the third tallest building in Mississauga as of 2011.

Living Arts Centre ( ~0.43 KM )
The Living Arts Centre is a 225,000 square foot (21,000 m²) multi-use facility which opened in Mississauga, Ontario, Canada in 1997. The Centre is visited by over 300,000 visitors annually, who come to view performing and visual arts programs, attend corporate meetings/conventions, or participate in a variety of community events.

Father Michael Goetz Secondary School ( ~1.01 KM )
Father Michael Goetz Secondary School (sometimes referred to as Goetz or abbreviated as FMG) is a Catholic school located in Mississauga, Ontario, Canada. Founded by Ed King, it was established in 1987 (in its original location on Hollymount Drive) and in 1990 moved to the south of the city centre.
Player One Amusement Group ( ~1.08 KM )
Player One Amusement Group (formerly Cineplex Starburst Inc.) is a Canadian company which operates family entertainment centres in Canada. Player One is owned by parent company Cineplex Entertainment.