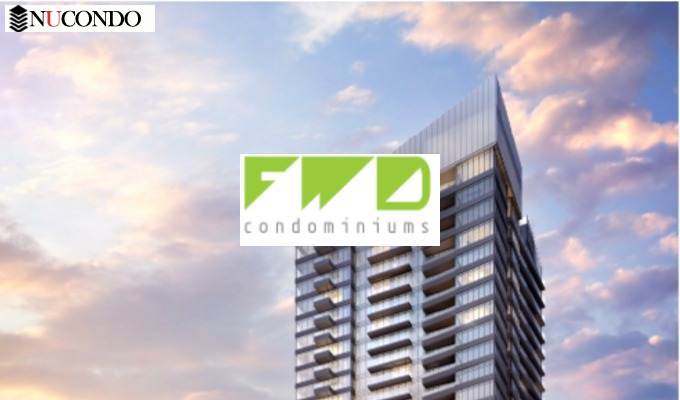 FWD Condominiums Condos has flexible floor plans and many size options.
With variety of amenities, it is made up of 1 Bedroom, 1 Bedroom + Den, 2 Bedroom, 3 Bedroom & Up, Other units.

The unit size is ranging from 505 to 1556 square feet with prices starting from low 300k.
This is a 30 stories Condo building.

Architectural design from the inside out. Making interior spaces work to the benefit of residents who live there. Then, and only then, design an exterior that is as beautiful and functional as the interior spaces it covers.
At Forward, we believe in the straight line. Clean, contemporary architecture designed from the inside out. If the interior works, the exterior design can be beautifully crafted. In short, we believe that beauty is more than skin deep

Canoe Landing Park ( ~0.19 KM )
Canoe Landing Park is an 8 acres (3.2 ha) privately funded urban park in downtown Toronto, Ontario, Canada, adjacent to the Gardiner Expressway that received its name on November 2009. The name was chosen as part of a city-run contest and the final name was announced on the t.o.night free evening commuter paper.

Malibu (Toronto) ( ~0.25 KM )
Malibu at Harbour Front is a high-rise condominium building located at 600 Fleet Street near the intersection of Lake Shore Boulevard and Bathurst Street in downtown Toronto, Ontario, Canada.
It is one of the many new condos in the Fort York Neighbourhood in the downtown core.

Fort York ( ~0.34 KM )
Fort York is a historic site of military fortifications and related buildings on the west side of downtown Toronto, Ontario, Canada. The fort was built by the British Army and Canadian militia troops in the late 18th and early 19th centuries, to defend the settlement and the new capital of the Upper Canada region from the threat of a military attack, principally from the newly independent United States.

New Fort York ( ~0.34 KM )
New Fort York was built to replace Toronto's original Fort York at the mouth of Garrison Creek as the primary military base for the settlement. Unlike the older fort, it was made with limestone instead of wood.

CityPlace, Toronto ( ~0.35 KM )
CityPlace is a neighbourhood in Downtown Toronto, Canada, within the former Railway Lands. When completed, this area will be the largest residential development ever created in Toronto.

Maple Leaf Stadium ( ~0.4 KM )
Maple Leaf Stadium was a jewel box-style baseball stadium in Toronto, Canada, located at the foot of Bathurst Street on the south side of Lake Shore Boulevard (formerly Fleet Street). It was built in 1926 by Lol Solman for his Toronto Maple Leafs baseball team of the International League.