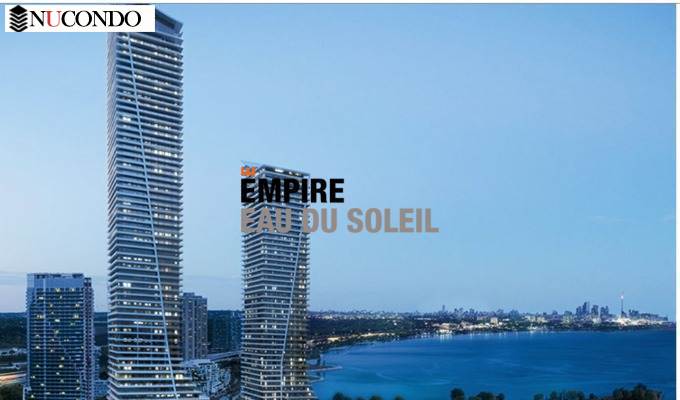 The unit size is ranging from 538 to 1147 square feet with prices starting from low 300k.
This is a 46 stories Condo building.

Located in the highly sought after Humber Bay Shores neighbourhood, Eau Du Soleil is Toronto's most successful waterfront community. With Eau Du Soleil almost sold out, Empire is excited to release a very limited collection of new condominiums featuring expansive terraces. Our brand new Terrace Collection takes full advantage of the stunning views of Lake Ontario and the Toronto skyline. Whether lake or city view, this outdoor amenity provides a true extension of your living space. Relax and indulge in a lifestyle that only few can aspire to, our rare Terrace Collection offers exclusivity and luxury combined.

Mimico Creek ( ~0.22 KM )
Mimico Creek is a stream that flows through Brampton, Mississauga and Toronto in the Greater Toronto Area of Ontario, Canada. It is 33 kilometres (21 mi) long, is in the Great Lakes Basin, and is a tributary of Lake Ontario.

Bonar Creek ( ~0.29 KM )
Bonar Creek was a creek in Mimico, Ontario, Canada. It was a tributary of the still-existing Mimico Creek, a watercourse that empties into Lake Ontario.

Humber Loop ( ~0.83 KM )
Humber Loop is a station and intermediate turning loop for streetcars on the 501 Queen line of the Toronto Transit Commission (TTC). It is located between the Gardiner Expressway and The Queensway just west of the Humber River in Toronto.

The Palace Pier ( ~1.01 KM )
The Palace Pier is the site of Palace Place and Palace Pier, two cruciform condominium towers tied for the 45th-tallest building in Toronto. They are located at 2045 Lake Shore Boulevard West and 1 Palace Pier Court in the Humber Bay neighbourhood.

Humber River (Ontario) ( ~1.16 KM )
The Humber River (French: Rivière Humber) is a river in Southern Ontario, Canada. It is in the Great Lakes Basin, is a tributary of Lake Ontario and is one of two major rivers on either side of the city of Toronto, the other being the Don River to the east.