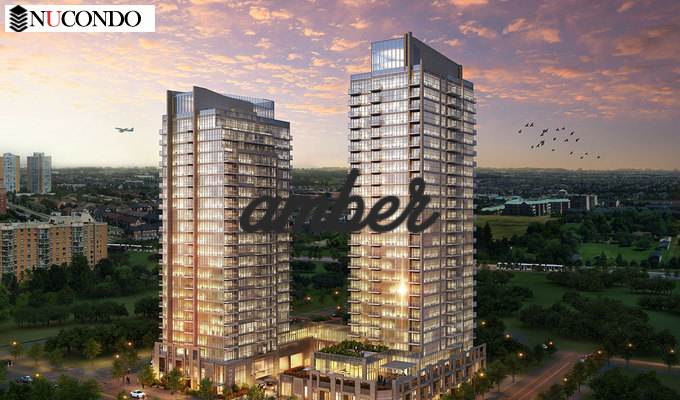 Amber at Pinnacle Uptown – Tower 1 Condos has flexible floor plans and many size options.
With variety of amenities, it is made up of 1 Bedroom, 1 Bedroom + Den, 2 Bedroom, 2 Bedroom + Den units.

The unit size is ranging from 560 to 919 square feet with prices starting from upper 200k.
This is a 26 stories Condo building.

Located at the corner of Hurontario and Eglinton Ave. West in Mississauga, Amber offers the excitement of a busy centre city and the tranquility of a suburban escape with its 15 acres of parkland.
Rising 26 and 23 storeys tall, Amber will offer dazzling architecture, smartly designed floorplans, sleek features and finishes, and enticing amenities – all are sure to be a real gem in the Mississauga City Centre!

Mississauga ( ~0.85 KM )
Mississauga /ˌmɪsɪˈsɒɡə/ is the sixth most populous city in Canada. Situated in Southern Ontario, it lies on the shores of Lake Ontario.

Toronto Township, Ontario ( ~1.5 KM )
Toronto Township is a former municipality that today is a geographic township in the city of Mississauga, in the Greater Toronto Area of Ontario, Canada. It is directly to the west (but is not part of) of the city of Toronto, and comprises land that makes up the majority of present-day Mississauga.

CKNT ( ~1.79 KM )
CKNT is a radio station that broadcasts a news/talk radio format on the frequency of 960 kHz/AM in Mississauga, Ontario, Canada.