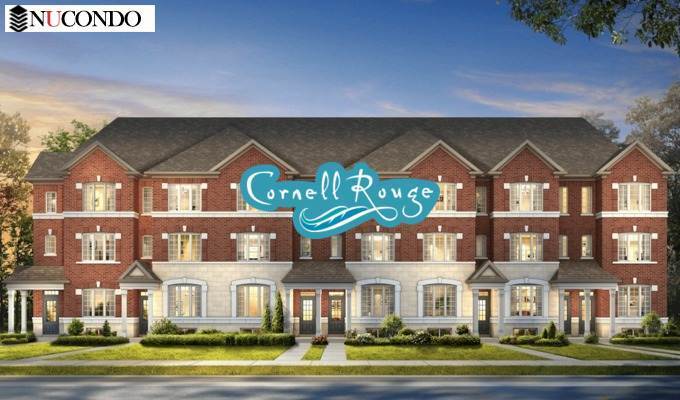 …where Rouge Park's thousands of wooded acres are located right next door, along with the river that runs through it. A forested paradise where a world of wonder can be found.

Summary of this detached development:

Cornell, Ontario ( ~0.8 KM )
Cornell is a new community village being developed in northeast Markham, Ontario and bounded by Highway 407, 16th Avenue, Ninth Line, and the Don Cousens Parkway. The 2011 population of this area was 9,880.

Cornell Terminal ( ~2.05 KM )
Cornell Terminal is a bus terminus, that has been part of long term planning by York Region Transit, and is expected to open in 2017 on a site immediately south of Markham Stouffville Hospital in Markham, Ontario, Canada.

Milnesville, Ontario ( ~2.3 KM )
Milnesville is a historic community of Markham, Ontario on the 8th Line (Hwy. 48), between Elgin Mills Road and Major Mackenze Drive, and the Little Rouge Creek.

Locust Hill, Ontario ( ~2.3 KM )
Locust Hill is a historic community of Markham, Ontario centred on Hwy. 7 and the Canadian Pacific Railway and within the boundaries of the future national Rouge Park.

Greensborough, Ontario ( ~2.4 KM )
Greensborough (2006 population estimated 5,000) (Census Tract Number 5350403.03) is a community in the city of Markham in the Canadian province of Ontario.
Greensborough is one of the easternmost communities in Markham, and with the exception of Dickson Hill, is also the northernmost.

Markham, Ontario ( ~2.68 KM )
Markham (/ˈmɑːrkəm/; 2016 population 328,966) is a city in the Regional Municipality of York within the Greater Toronto Area of Southern Ontario, Canada. Markham's population in 2015 was estimated at 342,000 through The Region of York population census data monitoring.